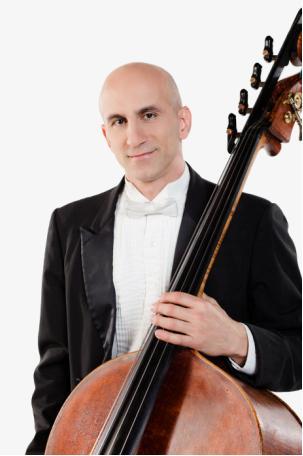 Michael Kazepides was born in Vancouver, British Columbia, and began his musical studies on the cello, switching to the double bass after 10 years of study. He received his bachelor's degree from the University of British Columbia, where he served as principal bassist for five years and also performed as a member of the Vancouver Symphony.

Kazepides earned his master's degree from The Juilliard School, where he performed the American premier of Bantun, a contemporary bass concerto written by Betty Olivero, with The Juilliard Symphony at Alice Tully Hall in New York City. His studies at Juilliard include work with conductors James DePreist, Raymond Leppard, Leonard Slatkin and Kurt Masur.

Currently, Kazepides is the associate principal bassist of The Phoenix Symphony and is the bass instructor at Phoenix and Mesa Community Colleges. He also carries a private studio of bass students from the Phoenix-metro area.

When he's not playing the bass, Kazepides is an avid hockey fan. He is the goalie of two Phoenix adult hockey league teams and plays two or three times a week.