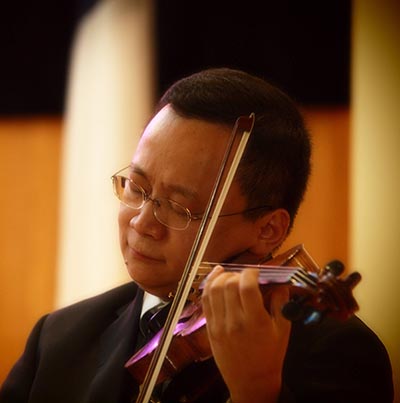 Mr. Vincent Lan Qiu has been playing in the first violin section with the Phoenix Symphony since 2003. Between 1996 and 2000, Qiu was a member in first violin section of the China National Symphony Orchestra, one of the most outstanding professional orchestras in China. Between 1987  and 2000, he toured and performed in most countries in Europe, Asia and North America.

Since graduating in 1989 from Central Conservatory of Music in Beijing, China, Qiu served as acting concertmaster for the China Central Philharmonic Orchestra (former China National Symphony Orchestra) in Beijing through 1996. With great honor, Qiu was invited to perform at the First Shanghai Worldwide Chinese Artist 2006 New Year’s Concert in China. In 1996, he was elected as the “Outstanding Young Artist of China.”  Qiu was also the winner of the National Youth Violinist Competition in 1990.

In February 2009, Qiu was invited to be the guest concertmaster for the Chandler Symphony Orchestra. With the same orchestra, Qiu was featured as the violin soloist performing Sinfonia Concertante in Eb Major by W. A. Mozart with violist Dwight Lear in March of that year.

With great honor, Qiu performed the National Anthem with violist Dwight Lear for the Diamondback game at the Chase Field on August 5, 2010.

As a violinist, Qiu has been actively performing with different chamber ensembles as playing a variety of music is his greatest passion.

Mr. Qiu lives in Chandler with his son Joseph, and their dog named JJ.