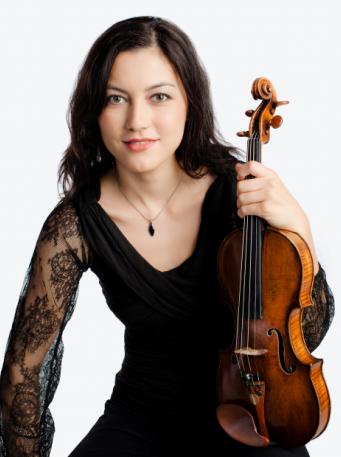 Violinist Karen Sinclair holds a Bachelor of Music degree from the Curtis Institute of Music, a Diploma of Postgraduate Performance from London’s Royal Academy of Music, and a Master of Music degree from Rice University. She made her solo debut at age eleven with the Philadelphia Orchestra and has returned to perform as a soloist with them on two other occasions. Her major teachers have included Jascha Brodsky, Yumi Ninomiya Scott, Gyorgy Pauk, Kathleen Winkler and William Preucil.

At the International Competition of Padua, Italy, Karen was awarded the top prize for Soloist with Orchestra, second prize for String Recital, and third prize for Virtuostic Recital and performed as soloist with the Bacau State Philharmonic of Romania. She was named the first prizewinner of the MTNA National Competition and the Delaware Contest for Young Musicians and was a top prizewinner at the Tibor Varga International Violin Competition in Switzerland and the Austrian-American Society Competition. She was also a finalist in the Houston Symphony’s Ima Hogg Competition.

Karen has participated in many music festivals and courses both in the States and abroad including Aspen, Encore, Verbier, New York String Orchestra Seminar, Holland Music Sessions, Accademia Musicale Chigiana, Sarasota, Spoleto USA, Music Academy of the West, Musike France, Ticino Musica, Domaine Forget and Kneisel Hall. While a student in England, she studied viola with Yuko Inoue and performed at Wigmore Hall and at the Spitalfields Festival. She served as Assistant Concertmaster of the Lancaster Festival Orchestra in Ohio and was a member of the Des Moines Metro Opera Orchestra. Other professional orchestral experience includes performances as a substitute member of the Philadelphia Orchestra, The Philharmonia Orchestra (London), Houston Symphony, and Saint Paul Chamber Orchestra and as a member of the Akron Symphony, City Music Cleveland, Pro Musica Chamber Orchestra of Columbus and the Canton Symphony with whom she appeared several times as soloist. Karen currently performs as a member of the Phoenix Symphony in Arizona and the Grant Park Orchestra in Chicago.

Karen and Phoenix Symphony violist, Christopher McKay, are the founders of a chamber music partnership called Urban Nocturnes. The pair are artists-in-residency at Trinity Cathedral in downtown Phoenix, where they perform a series of chamber music concerts every season and provide musical contributions for a number of the church's liturgical services.  In addition, Urban Nocturnes performs chamber music at a wide range of unique venues around town and frequently collaborates with other Phoenix-based musicians.  You can follow them on Facebook at www.facebook.com/urbannocturnes/.