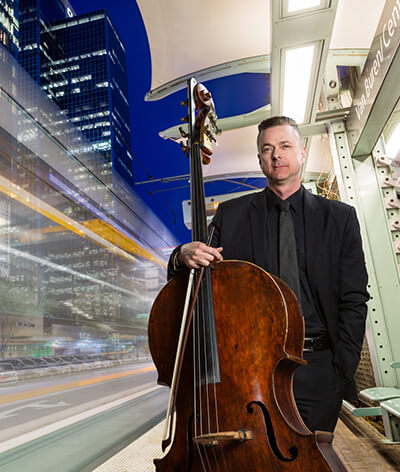 Jonathan Imsande was raised in Arlington, Texas and began playing the double bass at age nine. After receiving a Bachelor of Music Degree from Rice University in Houston, he earned his Master's at the University of Southern California, continuing with postgraduate work at Peabody Conservatory in Baltimore. Performing in Tanglewood with Leonard Bernstein and other musical luminaries was a highlight. His most influential teachers include Paul Ellison at Rice University and Hal Robinson, Principal Bass of the Philadelphia Orchestra. In 1992, Jonathan won a position in the Phoenix Symphony as well as the Grant Park Symphony, a Chicago based summer orchestra. He plays a 200-year-old bass made in England by William Forster, Jr. His outside interests include photography and restoring a historic home.