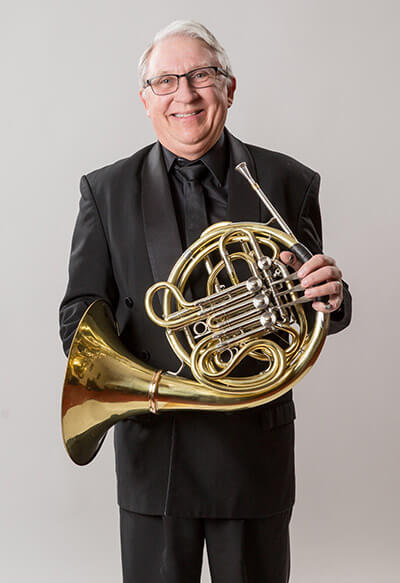 A member of The Phoenix Symphony horn section since 1974, Gregory Umber has been active in chamber, recording and orchestral music throughout his career. Mr. Umber has held positions with The Nashville Symphony, Arkansas Symphony, American Wind Symphony and the National Repertoire Orchestra.

A founding member of The Phoenix Brass, Mr. Umber recorded and toured with that critically acclaimed chamber ensemble for over 20 years.

In addition to his duties with The Phoenix Symphony, Mr. Umber has participated in numerous summer music festivals, including The Grand Teton Festival, Meadow Brook Festival, Peter Britt Festival and the Flagstaff Music Festival.

A student of Philip Myers, John F. Sawyer, James London, and Wendell Hoss, Mr. Umber holds two degrees from Peabody School of Music of Vanderbilt University and a graduate degree from the University of Kentucky.

In addition to his music interests, with the assistance of his architect son, James, and James' interior designer wife, Amanda, Mr. Umber has restored several vintage homes, including an 1885 Victorian in Northern Michigan, an early 1960’s Phoenix custom ranch, as well as a 1929 English Tudor in the historic Willo District.

Greg and his wife Molly Ann reside in Phoenix. When not making music, they enjoy traveling and spending time with their five grandchildren.