The Phoenix Symphony Announces the 2016/17 Season

The Phoenix Symphony Announces the 2016/17 Season

New this year, enjoy the Symphony Your Way with new and improved Choose Your Own (CYO) subscriptions featuring the flexibility to pick four or more concerts to create a subscription package that fits your individual schedule, budget and taste. This includes Classics, Pops, Legends and even Special Performances. The Season also includes expanded matinee programming, a continued focus on young American composers and traditional Classics, Pops, Family, Legends and Coffee Classics programming.

The Texas Tenors return once again after their sold-out performance in 2015 with an all-new holiday show. Enjoy some extra holiday cheer in a Thanksgiving weekend musical feast.

Disney in Concert features acclaimed Broadway vocalists and multimedia scenes from Frozen, Beauty and the Beast, The Lion King, The Little Mermaid and more projected on a screen above the orchestra.

Animal Kingdom Take a walk on the wild side with Animal Kingdom featuring music from Disney’s The Lion King, Prokofiev’s thrilling Peter and the Wolf and other animal-themed classical musical selections.

The Music of the Rolling Stones, featuring classic songs by the iconic group. Join vocalist Brody Dolyniuk and conductor Brent Havens as they take the stage to celebrate more than 50 years of music from the "World’s Greatest Rock and Roll Band." 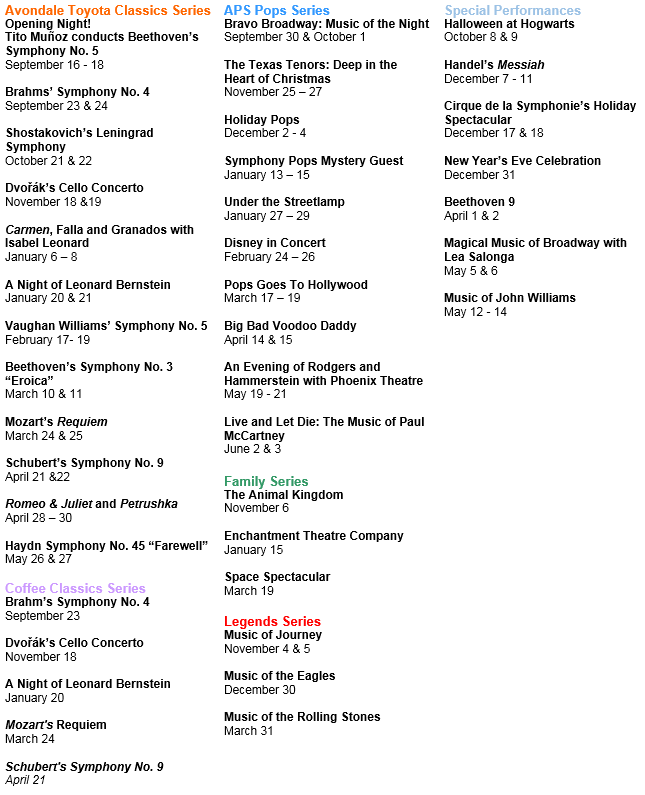